Our attention is focused on you.

The eye “sees” by focusing light rays from an object of regard on to the retina. The retina is a thin layer in the back of the eye that transmits visual signals to the brain. When the light is not properly focused on the retina, refractive errors occur requiring glasses, contact lenses, or refractive surgery to make vision clearer.

Myopia or nearsightedness means you can see better up close than you can at far distances as shown on the left hand photograph below. Myopia occurs because the eye is larger than average. The illustration on the right below shows the normal length of the eye shown by the dotted line. Since myopia is caused by the eye being longer than average, the light that is focused in the eye lands in front of the retina rather than on the retina. Nearsighted glasses, contact lenses, and laser refractive surgery are all used to move the image from in front of the retina to on the retina itself! For more information about laser refractive surgery to correct nearsightedness, see our Refractive Surgery page! 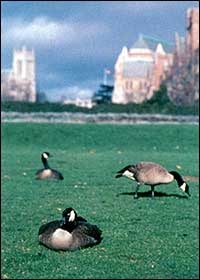 People with myopia or nearsightedness can see better close up than they can at far distances, as simulated in this photograph.

A myopic eye is longer than average.

Hyperopia or farsightedness means that you can see better far away than you can close up as shown in the photograph below. However, with higher amounts of hyperopia, you cannot see well either far away or close up! Hyperopia occurs because the eye is smaller than average. The illustration below shows the normal length of the eye shown by the dotted line. Since hyperopia is caused by the eye being smaller than average, the light that is focused in the eye lands behind the retina rather than on the retina. Farsighted glasses, contact lenses, and refractive surgery are all used to move the image from behind the retina on to the retina itself! For more information about laser refractive surgery to correct farsightedness, see our Refractive Surgery page! 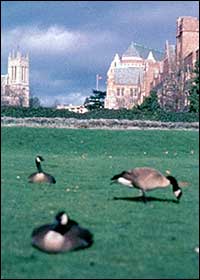 People with hyperopia or farsightedness can see better far away than they can close up, as simulated in this photograph.

A hyperopic eye is smaller than average.

Patients with astigmatism have distortion of vision in addition to blurring of vision. This distortion is shown in the photograph on the left below. Normally, the eye is shaped round like a basketball. With astigmatism, the eye is shaped more like a football. That is, it is curved more in one direction than it is in the opposite direction. As shown in the illustration to the right below, this is usually caused by an irregularly shaped cornea which is steeper in one direction. In the illustration, the steepness is shown on the left compared with the normal cornea on the right. Astigmatism is corrected with glasses, contact lenses, or laser refractive surgery. Glasses and contact lenses change the way light rays are focused in two different directions. Laser refractive surgery flattens the steep part of the cornea to make it more “basketball” shaped! For more information about laser refractive surgery to correct astigmatism, see our Refractive Surgery page!